Tree LSTMs generalise LSTMs to tree-structured network topologies. Compared to sequence models which consider words as they appear in temporal order (or in the reverse direction), tree-structured models compose each phrase from its subphrase according to the given syntatic structure.

Tree LSTMs are conceptually straightforward extension of RNN-LSTMs but need a fair bit of thought to implement. Here’s what we need:

A bash script to compile and run our Parser script.

Now, the sentence “Papa ate the caviar with a spoon” becomes

We can visualise this with the nltk package 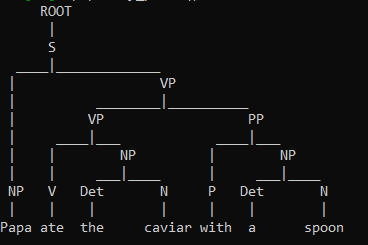 2. Converting the parse tree into a series of instructions

We build a Tree-LSTM from our understanding of how a standard RNN works. In contrast to the standard RNN which takes in the input from the previous time step, the tree-LSTM will take inputs from the hidden states of its child cell as described by the syntatic parse.

This implementation is heavily influenced by stack-reduce-parsing. However unlike stack-reduce which processes things sequentially from the stack, our instructions allow us to combine the current representations at every position of the stack.

Taking the leaves as example:

We can encode every tree position in this fashion.

treepositions has parameters postorder and preorder, which corresponds to different types of depth-first search. We use the pre-order search order for this implementation.

The buffer is given by tree.treepositions('postorder'). For each element in the buffer, if it is a leaf, add it to the stack to process. If not, get the stack-positions of all its children, and replace the children on the stack with the parent element. After processing each non-leaf buffer element, increment a sequence of actions. The action sequence can either be unary(single element) or binary(tuple), which informs us which stack positions should be progressively fed as input to the neural network starting from the leaves(words).

Unlike standard RNN modules hich take in a sequence, we have to progressively combine inputs as specified by the action sequence, therefore all our RNN units are maintained at the cell level. The architecture consists of

While looping over the action sequence, we update our stack after each action with the new input, hidden cell, lstm cell: (x, (hx, cx)), noting that beyond the leaf nodes, x is simply a zero tensor because we only need to consider hx as inputs to the next cell.

We also need to maintain the stack with update and delete actions the same way we did previously when getting instructions from the parse tree.

In this example we combine child cells by simply summing them together, but there are of course more sophisticated ways of combining cells by doing clever things with the gating mechanism of the LSTM (Tai et al., 2015).