We often want to find the shortest path from A to B, where A and B are expressed as nodes, and linked by edges in some graph structure. This simple problem description is non-trivial because of certain properties of the problem and increasingly relaxed assumptions about the problem.

Edges are directed and have equal weight of 1. The shortest path is thus the number of edges traversed.

This algorithm processes nodes with increasing distance away from the starting node. There are two separate steps for this algorithm, 1. Discovery and 2. Processing. New nodes are discovered by processing old nodes. The shortest path can be obtained by backtracking from the target node back to the source.

Example where we are provided with the Graph Structure (from an adjacency list). Which can be visualised from a dot file. The start node $s$ explores its neighboring nodes, $c$, $d$, $a$. Nodes which are further away from the source have an increasingly lighter color shade. 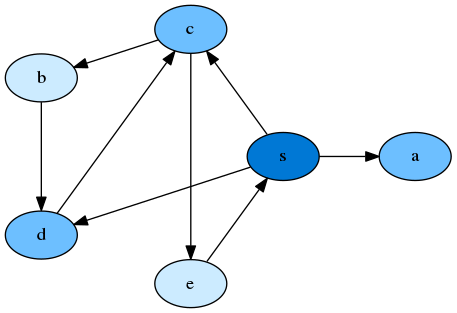 The algorithm can be implemented with the following:

Initialise the distance hashmap by setting all distances to infinity.

To run the Breadth-first search procedure on any input node, we first enqueue the input node, and set its distance to 0. Next, we process the (source) node and find (target) nodes that are linked to it. If the target nodes have not been explored before, i.e. distance is inf, then we enqueue the target node and (1) update its distance by adding the current node’s distance +1. and (2) keep track of the node that preceeded it.

Edges are directed and have positive lengths. The shortest path is thus the shortest edge distance traversed (not the number of edges). 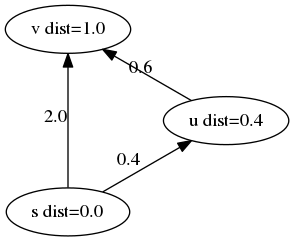 To implement the algorithm efficiently, we need mechanisms to:

Note: Heapify after adding each node is an $O(n)$ operation. Hence we use the work-around recommended by python docs which does not disrupt the original heap but continuously adds to the heap.

The Bellman-Ford iterates over the Graph $|V|-1$ times, and relaxes all edges $E$ in the graph at each iteration. Unlike Djikstra’s algorithm which assumes that all edge weights are positive, and can selectively relax edge weights based on the sequence of node explorations (implemented by the priority queue), the Bellman-Ford can not assume the correct sequence of node and edge exploration and hence iterates through everything with brute-force.

As a result of the brute-force procedure, the implementation is considerably simpler than Djikstra’s. The algorithm is guaranteed to converge after $|V|-1$ iterations to the right distances if no negative cycles exist. Hence, a convergence check shows whether or not there are negative cycles in the graph.

Introduction to Algorithms (CLRS) 24.1-24.3
UCLA and School of Economics(Coursera)